Theological Faculty, whose successor is today’s Catholic Theological Faculty, was one of four constituting faculties of Studium Generale in Prague. Thanks to the support from archbishop Arnošt of Pardubice, it quickly built up a significant position developed by the activities of capable university Masters. The foundation deed of Collegium Carolinum from 30th June 1366, established for 12 Masters of Art, required that two of them had to be able to lecture theology. In the same year, All Saints College (so-called Angle College) was established, which was intended only for theologists and whose seat was in St Nicholas House in Old Town in Prague. With the growing number of students, bigger teaching grounds were needed and the main place for theological lectures were the premises in nowadays Carolinum.


After the decline as consequence of the Hussite Wars, the faculty stopped working and theology teaching was restricted to the activities of the individual masters. A change came with the arrival of Jesuits in Prague. In 1562 St Clement’s College was established at Charles Bridge where Jesuit priests provided comprehensive education (the basis was a five-year secondary grammar school followed by a three-year philosophy course and a two-year theology course). However, St Clement’s College had its own chancellor and after the uprising of the Bohemian estates was defeated, when the university was transferred to Jesuits in 1622, the dissatisfied archbishop Arnošt Harrach established his own theological seminar. However, he could not stop the intended unification and starting from 1654 the renewed theological faculty was part of Charles-Ferdinand University and it was situated in the premises of Jesuit Clementinum. At the same time, the other colleges, except the Jesuit one, ceased to exist.


While the buildings of university Carolinum had been dilapidating gradually, Clementinum, after its generous reconstruction, was turned into a Baroque architectonic dominant providing excellent conditions for both teachers and students. In the premises of Clementinum, theology continued to be taught even after the Jesuit order had been abolished (1773), but it had to face a much stricter supervision by the state administration. In the 19th century it also became obvious that the premises and technical background in Clementinum do not correspond to the needs of the faculty which divided, starting from the academic year 1891/1892, to a Czech part and a German part, despite this split was still refused for several years after that by Archbishop Bedřich Schwarzenberg, insisting on the supranational character of Catholic Church. Before the World War I started, the theological faculty had been moved from Clementinum to Clam-Gallas Palace but here the rooms were not suitable either and there was no background for libraries and studies. Therefore, discussions opened at the beginning of the 20th century concerning a possibility of giving the theological faculty its own building, together with the chancellorship and faculty of law in the planned complex of buildings on the Vltava embankment near Čechův most bridge. 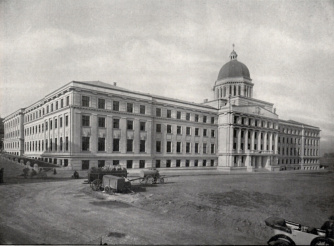 However, these plans were not implemented and after Czechoslovak Republic had been established, the theological faculty could not count with a significant support from the state or university. The faculty used the teaching premises in Spálená street, while the Prague archbishop seminar was still situated in a part of Clementinum. This temporary situation was finished by Prague Archbishop František Kordač. He sold the seminar premises in Clementinum to National and University Library and started the construction of a new, generously designed building which would provide the background for both the Czech and the German theological faculties as well as premises for educating future priests (a priest seminar) according to the Roman models. Based on the design by František Havlena and Jaroslav Rossler, a large building was constructed between 1925 and 1927 in Dejvice, somewhat away from the places of academic activities, in former Sadová street, today Thákurova street. Besides teaching and accommodation premises, it also included St Adalbert’s church for the seminar. The dominant feature of the building was a distinct dome following the example of the dome of St Peter’s Basilica in Rome, under which the seminar chapel was situated. The work was completed in 1931 and the archbishop seminar worked there starting from 1928 as it had to leave the Clementinum premises earlier.


When Czech universities were closed in the 2nd World War, the Czech theological faculty had to cease its activity as well, while the German faculty in Dejvice stayed open until the end of the war. The education of future priests of Prague archdiocese moved to the theological institute in Břežany but even here the professors from the closed faculty were not allowed to teach. After the war, everything got restored quickly, after the expulsion of Germans, but without the German theological faculty. However, the Czech faculty stayed reopened only for a short time. After being excluded from Charles University faculties (1950), it was moved to Litoměřice in 1953 where it worked with many restrictions as Roman-Catholic Sts Cyril and Methodius Theological Faculty until 1990. In the former Prague building, army warehouse was established temporarily and later it was the main seat of the editorial office of the international magazine Problems of Peace and Socialism. Deconsecrated St Adalbert Church was reconstructed radically, and it was used as a conference hall and later as a recording studio. In early 1990s the building was returned to Archdiocese in Prague and theological faculty was moved there from its exile in Litoměřice and it started to be used as the main place for education of priest candidates from Czech dioceses. Currently it is open for all students interested in theology and in 2003 its prestigious Institute of Christian Art History was established there.

The history of the faculty can be traced up to the year 973 as it continues in line with the education originally administered by the bishopric at the St. Vitus Cathedral. However, it was on January 26, 1347 when a privilege granted by Pope Clement VI opened the way for the establishment of a Studium generale in Prague. By the Charter of April 7, 1348, the King of Bohemia and of the Romans Charles IV founded a university with four faculties (liberal arts, medicine, law, and theology). Since that time, its legal existence has been continual.

The emperor Ferdinand III. merged Carolinum and Ferdinandeum into a single Charles-Ferdinand University with four faculties. Theological Faculty and the Faculty of Arts were administered by the Jesuits. The archbishop was confirmed as a chancellor, but this function was performed by a rector in practice. The university was supervised by the state and was not related to any particular denomination.

At the culmination of the Czech national political movement, the University was divided into a German and Czech institution. The Theological Faculty remained common to both.

Because of threatening exclusion from the university the Theological Faculty had to be divided also into Czech and German part.

This year marks the end of Charles-Ferdinand University and the origin of Charles University (Czech) and German University. Both theological faculties were parts of respective institutions.

The theological faculties of Charles University and German University moved to the new building of a new Archbishop seminary in Prague-Dejvice built by F. X. Kordač.

After the Nazi occupation of the Czech Lands, the German University was subordinated to the Third Reich. All Czech institutions of higher learning were closed and their activities were banned until 1945. It concerned theological faculties as well.

The renewal of free academic life at Charles University was interrupted by the communist coup of 1948. For many years to follow, this anti-Church regime subjected education and research to tight ideological and political control.

The Theological Faculty was separated from Charles University, academic staff dissolved and many students denied further study. Some of the lecturers and students were imprisoned or persecuted in other ways.

The Theological faculty and seminary were moved to Litoměřice, Northern Bohemia.

November and December mark the end of communist totality in Czechoslovakia.

The autonomy of the university was restored and the Catholic Theological Faculty became a part of Charles University again.

How to find us